Beendigen and the Ontario Native Women’s Association (ONWA) announced the expansion of Talk4Healing, a crucial helpline that promotes the mental health and well-being of Indigenous women.

The 24-hr. helpline ‘for Indigenous women, by Indigenous women’ offers services in 14 Indigenous languages as well as English. In the last year alone, Talk4Healing received nearly 20,000 calls from northern communities, where it had previously only been available.

For ONWA Board President Dr. Dawn Lavell Harvard, Ph.D., who is also a member of the Wikwemikong First Nation, there could be no better way to commemorate the sixth anniversary of Talk4Healing, which began operations on October 19, 2012, than with the expansion of services across Ontario.

“Providing this support in a culturally sensitive manner while guiding women through existing opportunities is vital to creating a culture of empowerment,” explained Lavell Harvard. “After all, empowered women become the change agents we need to help reverse the stigmatization and socio-economic barriers Indigenous women continue to face in Ontario.”

Talk4Healing is a vital service in addressing the advancement and prosperity of Indigenous women across the province and to address violence against women and human trafficking.

Helpline services continue to be provided by operating partner, Beendigen.

While Indigenous women in Ontario are increasingly taking on leadership roles to effect change in their lives and communities, Robin Haliuk, Talk4Healing Supervisor, Beendigen notes that many still face hardships and challenges that they need support with.

“In the past six years, we have helped Indigenous women escape violent relationships, deal with overall health and wellness issues, manage difficult personal relationships, supported them through financial turmoil and provided advice and referrals for those seeking addiction services,” said Haliuk.

Haliuk continued, “And although we have seen an increase in calls, we need to keep in mind that for every woman who has come forward to use the Talk4Healing service, there are three to five others experiencing some form of crisis that haven’t had access to vital support.”

Lavell Harvard concurred, “That’s why this expansion is crucial to the advancement of Indigenous women across Ontario. Now every Indigenous woman in this province has access to the support they need from women who have the cultural awareness and understanding needed to counsel.” 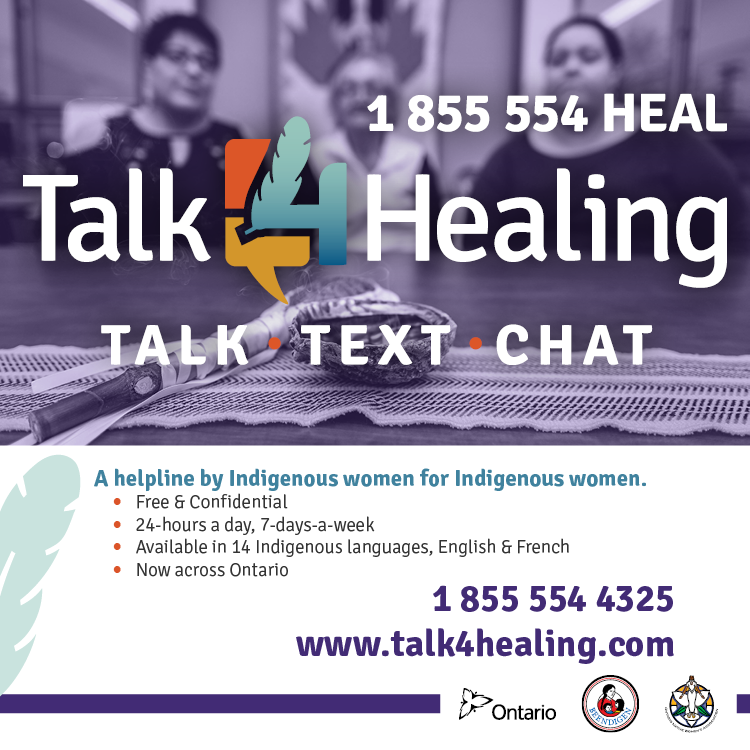